The Spigot Mortars of Bordon

During the early part of the war after the defeat of Dunkirk June 1940 the country had to prepare itself against the threat of German invasion. Not only were defence lines drawn up and quickly built, a new defence army was also formed namely the Land Defence Volunteers or LVD for short or as my great aunt would say 'Look Duck and Vanish, named the Home Guard when it was a bit more organised.

Most of our good equipment and weapons were left in France with the evacuation at Dunkirk leaving the armed forces with barely few arms to defend itself properly from imminent invasion, leaving 400 tanks and 2,400 heavy guns as well as small arms which most ended up abandoned on the beaches of Dunkirk.

Weapons for the army were in such sort supply that many ideas for weaponry against enemy troops and tanks were devised by the army and Home Guard in need and designed in haste until production in the factories caught up with the short fall, some ended up as failures some were still used into the 1950s. Of the many weapons devised there was the Smith Gun. The Northover projector, Sticky Bomb and the PIAT some of these design ideas ended up as Hobarts Funnies for the Normandy invasion. 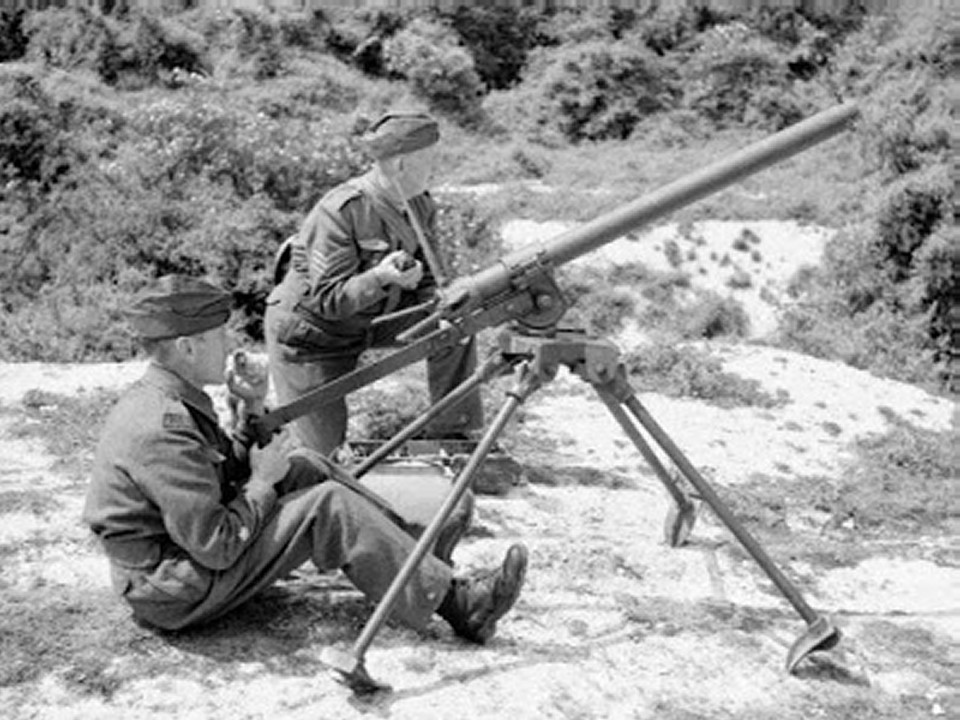 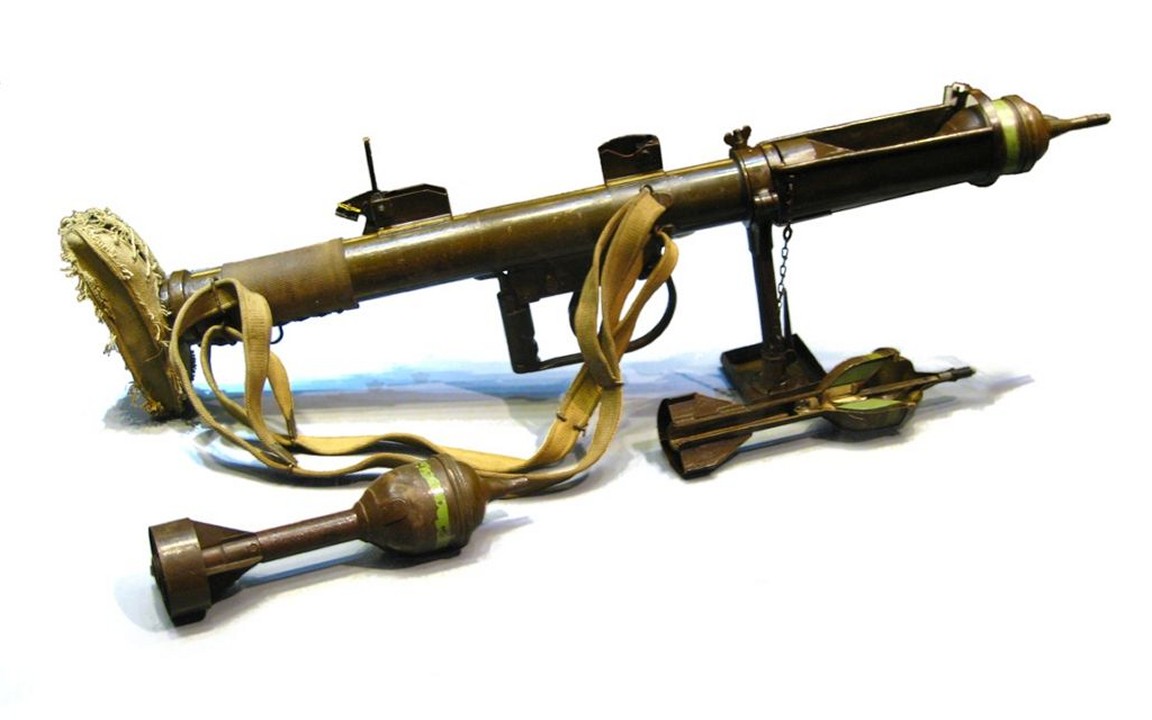 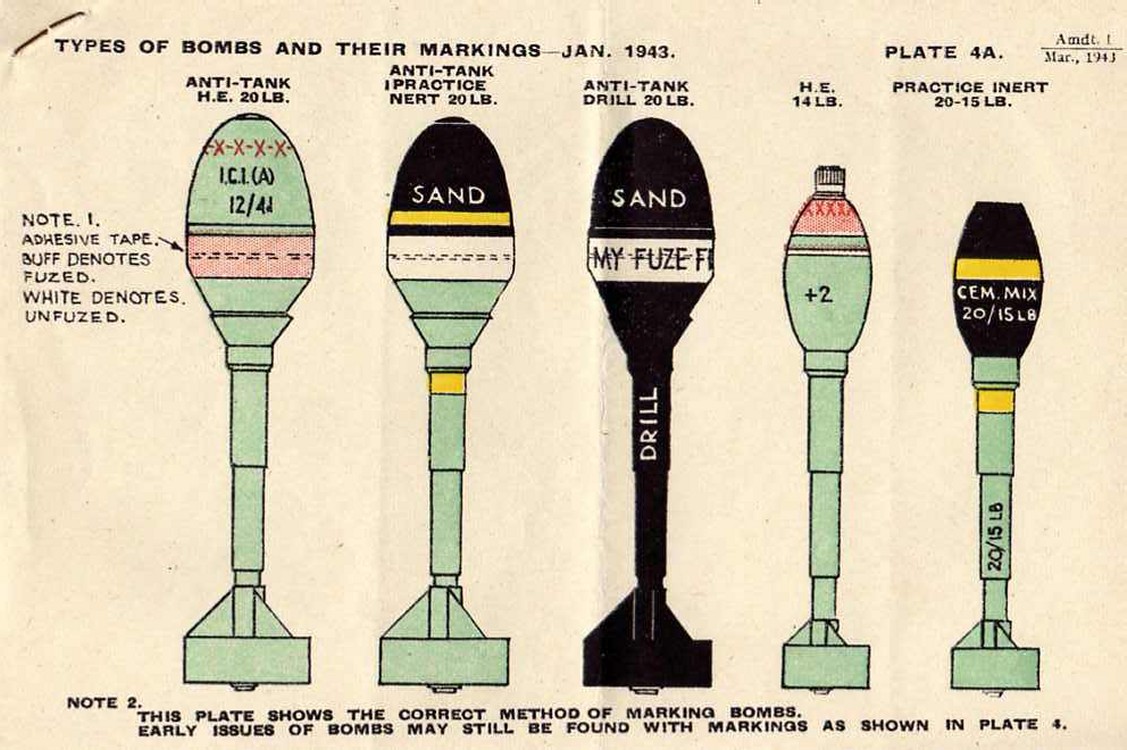 One of the early emergency weapon designs was the 29mm Spigot Mortar Blacker Bombard as it was known. Its design was a bit cumbersome and the projectiles bulky and early technology. It was used to about 1944 when lighter and better anti-tank designs came along. It was also used in the early part of the North African campaign.

The Spigot Mortar was more of a defence weapon in that it defended an area like a road junction or road block, its roll was anti-tank gun or anti-personnel, like vehicles and advancing troops. It was very clumsy at being used in an offensive roll as it needed to be handled by a team of 5 men to move it about, 300 pounds in total weight and not that quick to set up under tense combat conditions, especially if a gun crew member was down killed or wounded, then the movability of the Spigot Mortar would be more difficult.

The Spigot Mortar used a variety of Bombs with two sizes of bomb head and drum tail unit. 4 inch and 6 inches. The middle tube acted as the barrel on this Spigot design which was standard for all sizes of the bomb types. This middle tube held in place at the top a propellant cartridge of two sizes marked black or red. The Drum tail was held in place with a large diameter circlip and the head of the bomb screwed to the middle tube where the propellant cartridge was inserted. Normally live high explosive rounds were ready for use apart from the fuse that had to be fitted and prepared before use.

Practice concrete filled practice rounds could be fired many times over until they were unrepairable. Damaged drum tails could be straightened out or replaced by stores. The concrete filled heads were made of cast iron and were discarded if they formed cracks or damage that would be unsafe to fire again. The middle tube or barrel of the bomb was swabbed and cleaned out with water and oiled after a practice session and stored ready for re-use for the next practice exercise until damage occur and was discarded.

Firing the high explosive bombs at short range could present a hazard to the firing team as debris from the exploding bomb tended to fly back in the direction of the Mortars position. Upon firing which the firing lever was similar to a brake lever on a bicycle the bomb left the back end of the propellent cartridge which was made up from two pieces just in front of the firing position, the other part remained in the middle barrel part of the bomb, this firing process was the same a the PIAT gun. In archaeology a Spigot Mortar position can be found if it was active during the war, either practice or live firing by the spent cartridges found in front the position. 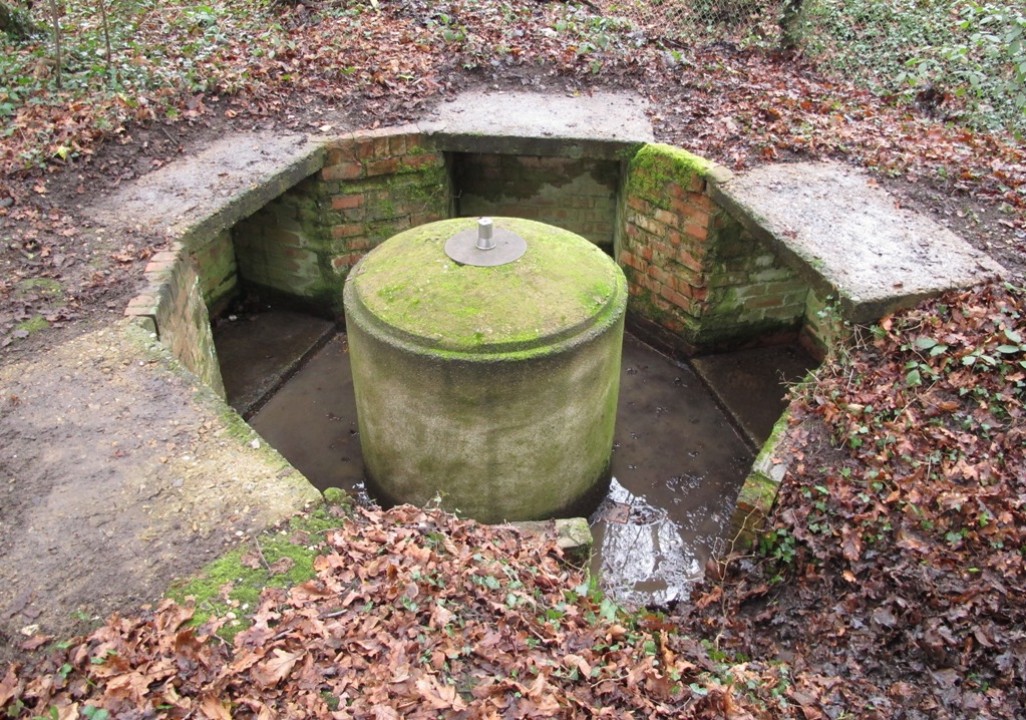 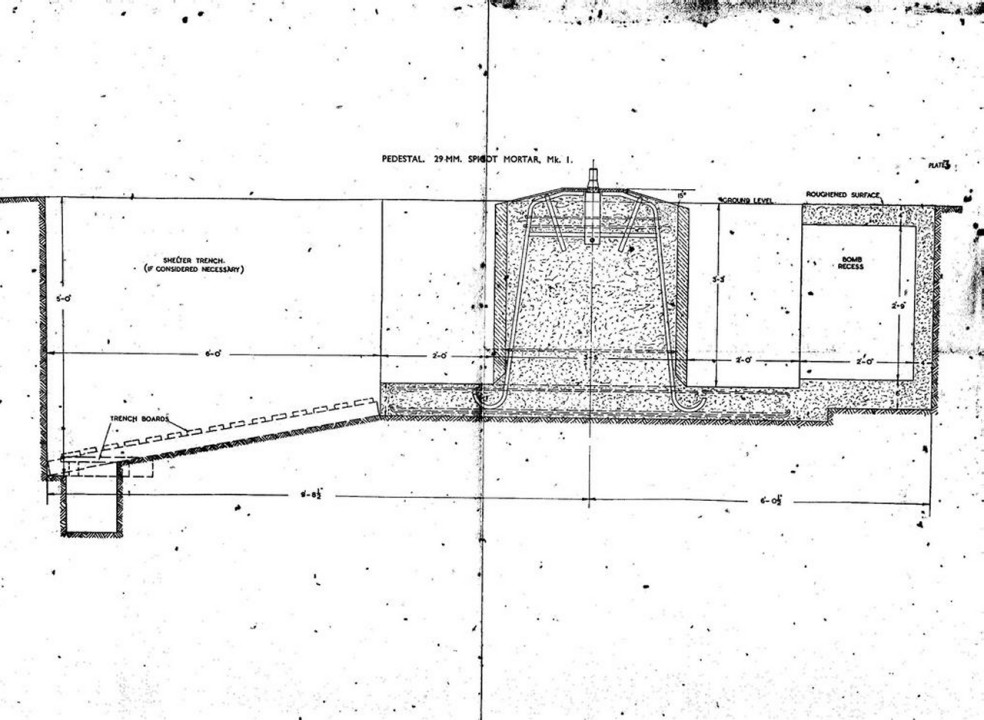 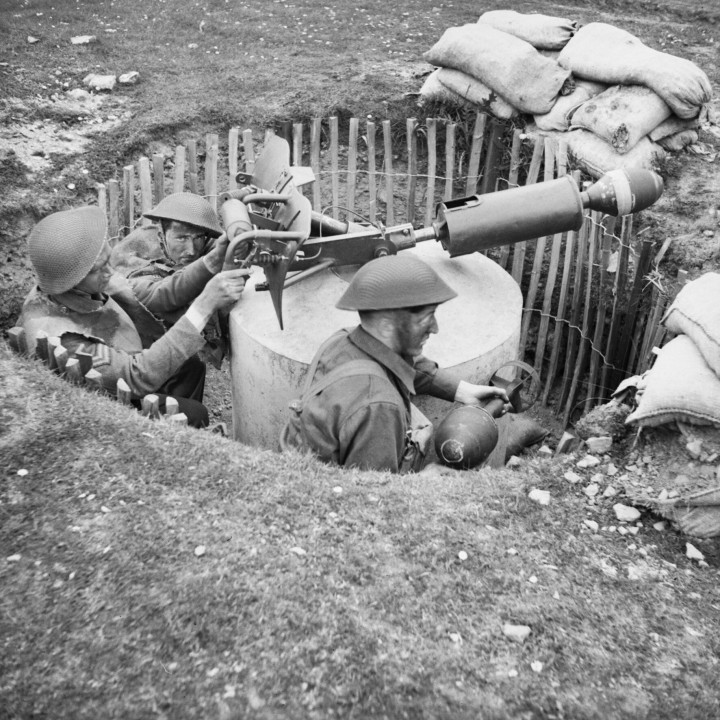 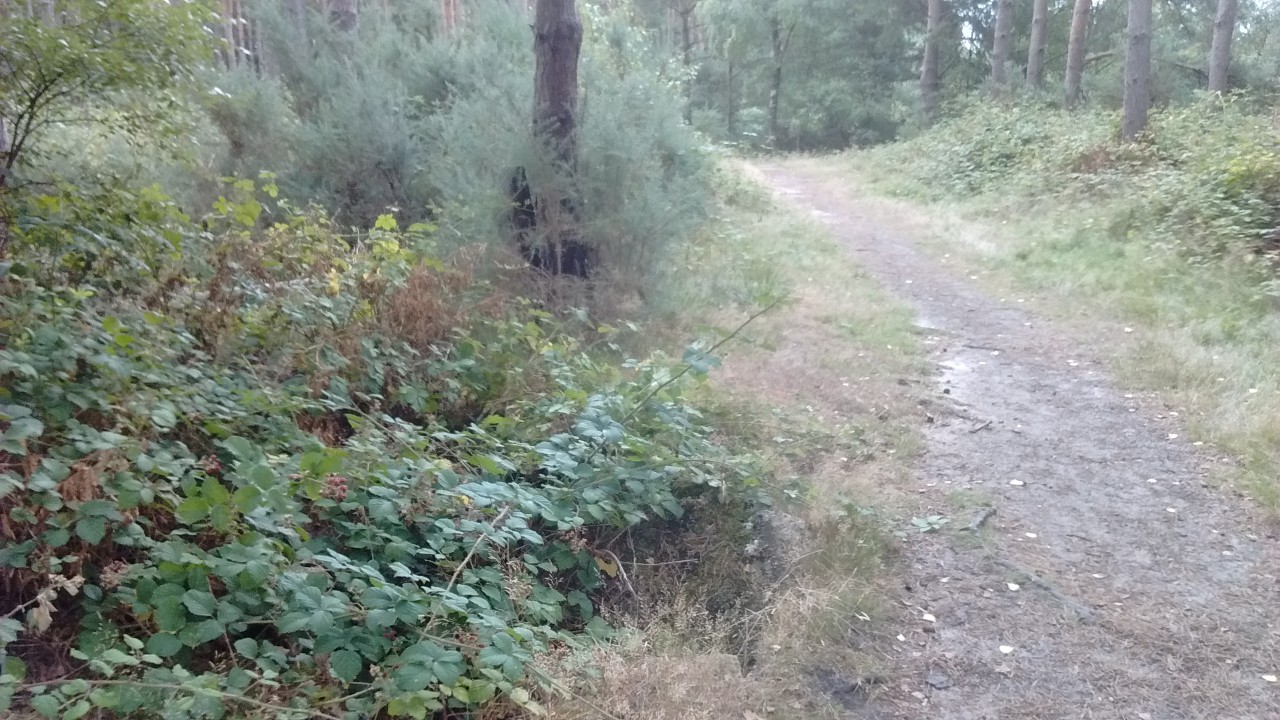 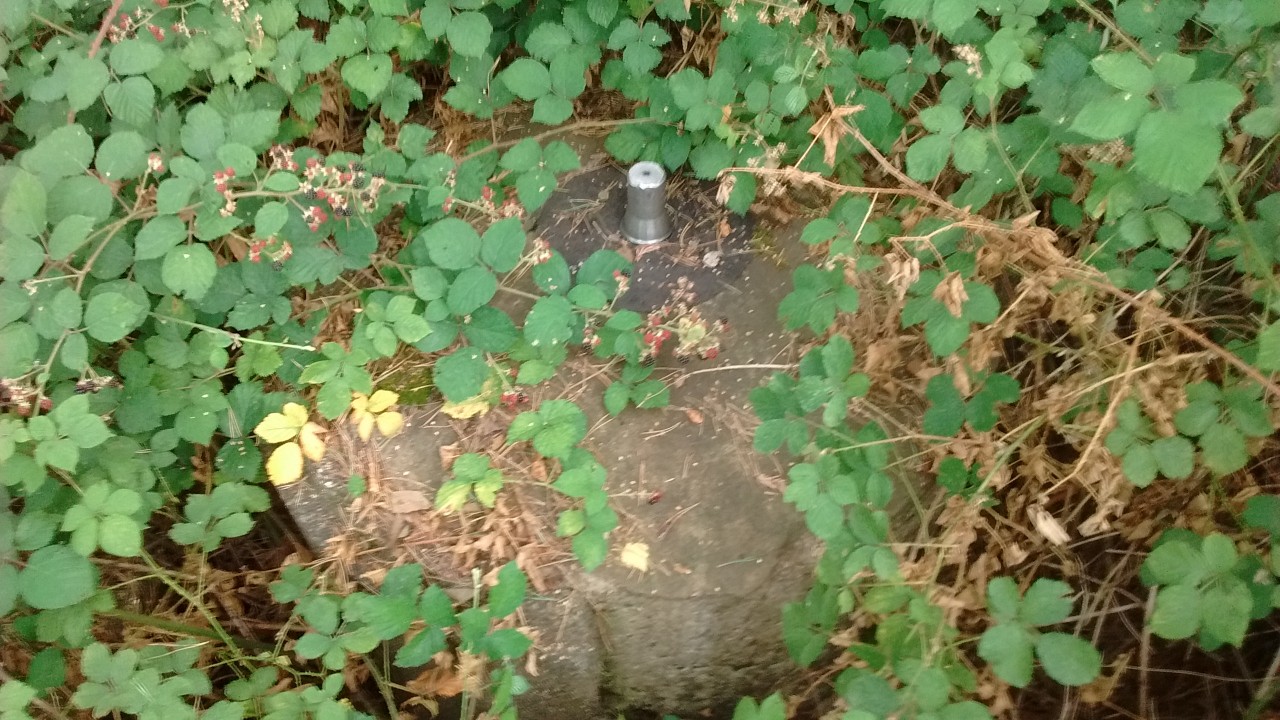 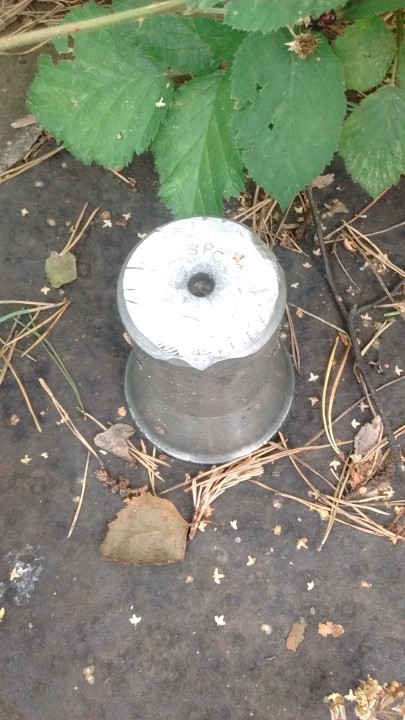 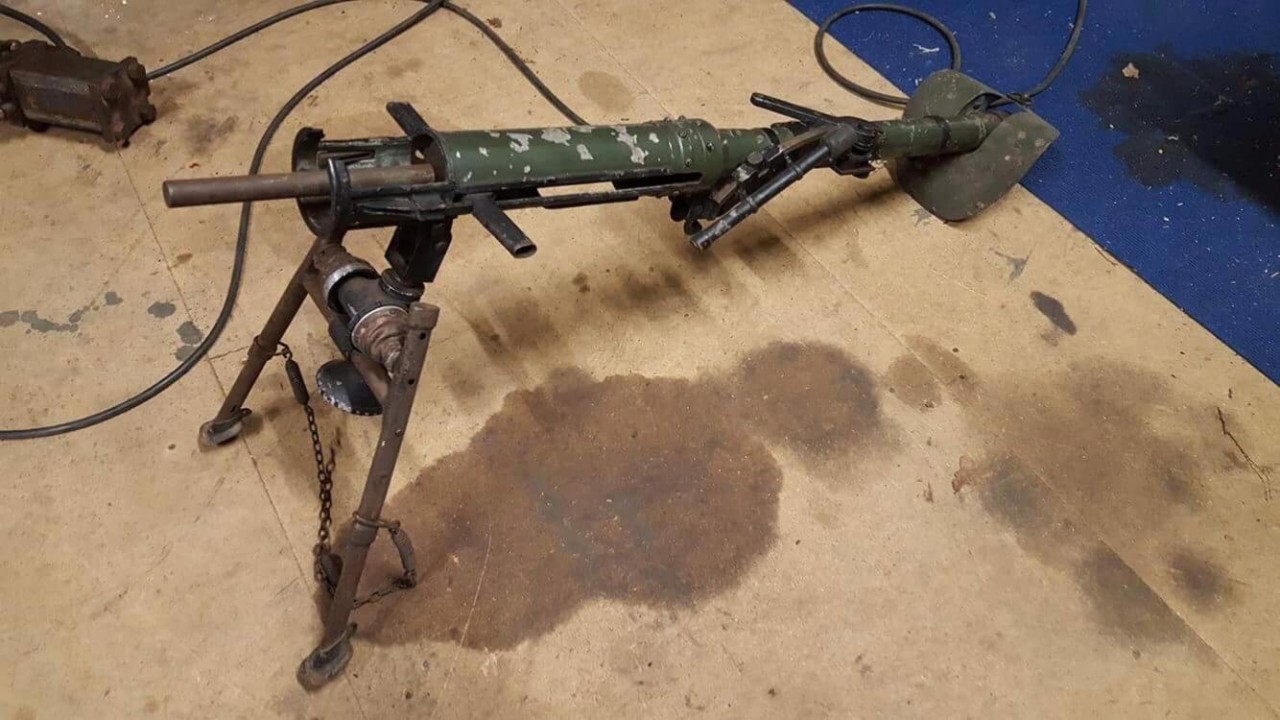 Being a lump of a weapon, the war office built many strategic points around the country to defend important locations in case of invasion for Spigot Mortar use. The design of the emplacement was built so the Mortar could be used by itself without the 4 large heavy legs although it was practice setting up the Mortar with them for added stability or if it needed to be relocated in an emergency during an attack. Its only downfall with the troops who used it was that it was bulky heavy and not that mobile enough and could be dangerous to the user at close range and its accuracy was not that great most probably down to the limited supply of bombs each unit was supplied with. On wheels with a lighter and more efficient bomb type such as Hollow charge like the PIAT Gun it could have been more of a success of a weapon.

The emplacement is a round brick constructed pit about 3-4 feet deep with small alcoves around the edge. In the centre is a 2-foot diameter concrete pedestal with a stainless-steel pin in the centre on top that accommodates the Spigot Mortar itself. The small alcoves surrounding the centre accommodates rounds and parts and equipment for the Mortar.

The emplacement is designed so it can traverse through 360 degrees for all round covering fire with the Mortar positioned at ground level. It also gives cover and protection for the crew as they can sit lower in the pit. When these emplacements are in use they are usually camouflaged with the Mortar supported and set up using the pedestal pin and the 4 heavy legs provided. 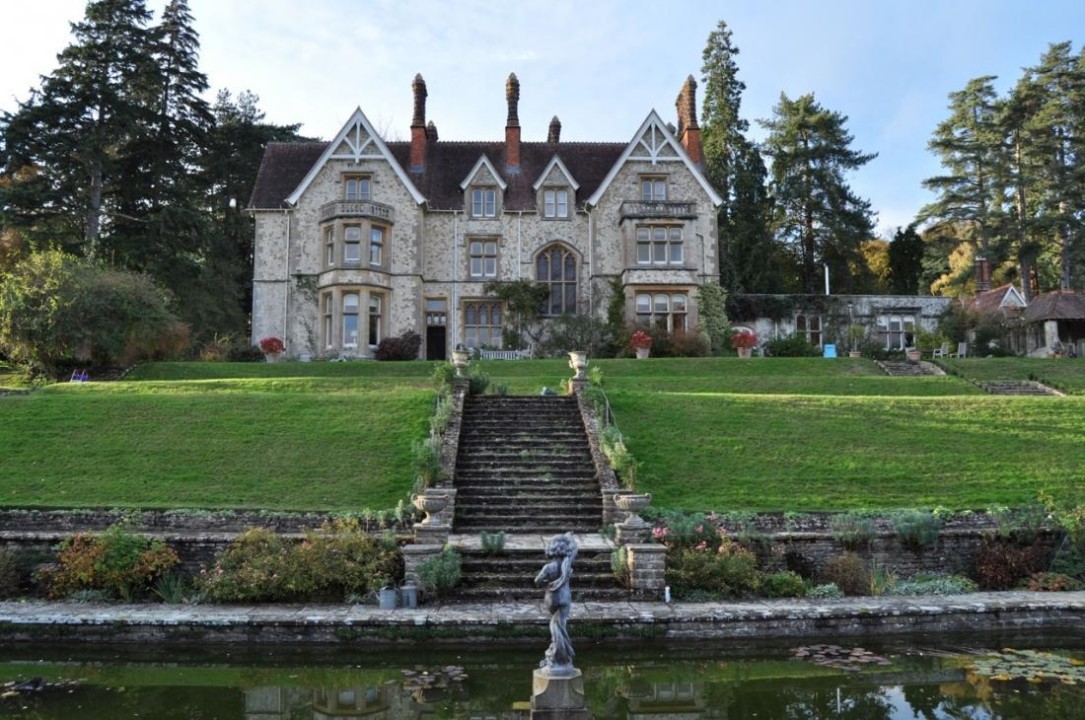 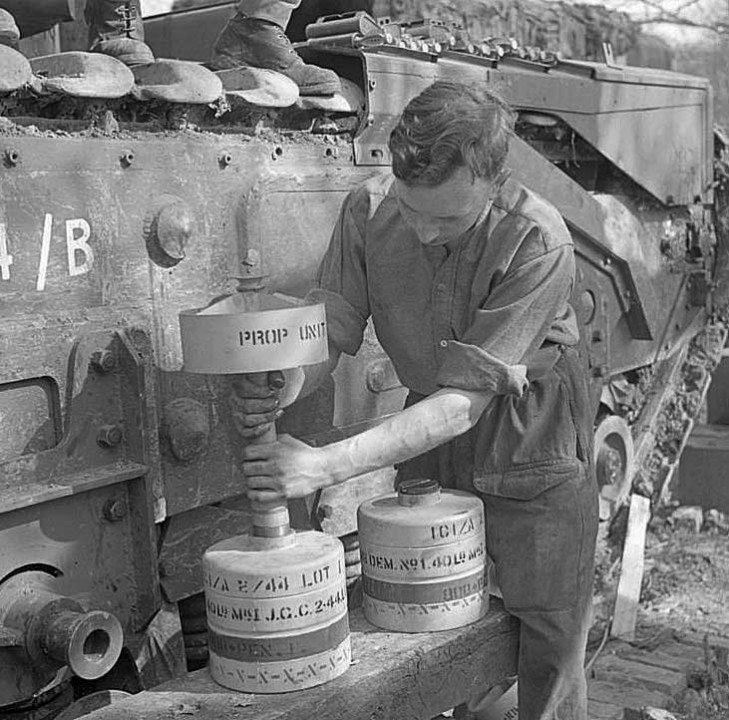 The condition of the Whithill spigot emplacement is in a poor state and needs renovating as it is mainly over grown with bramble bushes and may have tree root growth pushing the structure about. Its also situated just on the edge of a path way used by the public which could pose as a heath and safety issue ie someone falling into the pit, beware if you plan to visit for a look. I suspect its position was to guard and protect the junction at the then Whithill crossroads and rail bridge.

Ironically these local spigot emplacements are not that far from where Lt Col Stewart Blacker the inventor of the Spigot Mortar lived in Liss at Coldhayes house. A friend of mine who has written many a book about British ordnance happened to have the good fortune to visit the house where the family lived until recently. Blacker family who still had a few mementoes of his inventions when he visited the house.

These were tested locally at Hankley Common on the mock Atlantic wall for breaking bunkers and busting pillboxes. Hankley Common is a must see especially the Atlantic wall, worth the visit. The Hedgehog Mortar was designed for use by the navy as a barrage weapon from ship to shore or as an anti-submarine weapon.