In 1942 work started on the construction of the large sheds in what is now the Technical Training Area of the School of Electrical and Mechanical Engineering; the inscription on the north-east corner of Building 74 records the event:

The unit occupying these buildings was 1 Canadian Base Workshop and here also much equipment and many vehicles were stockpiled for the invasion of Europe in 1944. 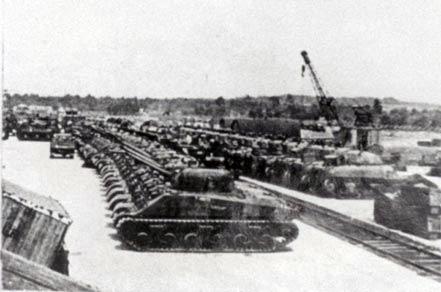 On the departure of the Canadians in 1946, the workshop area was shared between 3 Central Workshop, Royal Electrical and Mechanical Engineers and 44 Ordnance Sub Depot, whose parent unit was the Central Ordnance Depot at Chilwell.

The Ceremonial Amalgamation of 4 and 6 Training Battalions was held on 17 March 1961, when a plaque commemorating the event was unveiled by Major General D A K Redmond OBE, Director of Electrical and Mechanical Engineering.

Then in 1972, the 9 th Field Workshop (Force Troops) REME was formed, only to be absorbed five years later by the 3 rd Field Workshop REME, also a newcomer to Bordon.

With the reorganisation of the field Army, previous company-sized workshops were grouped into battalions. By happy coincidence the first REME battalion was 6 Battalion, shortly to be replaced by 4 Battalion, thus replicating the training battalions which had for so long been in Bordon.

Purpose-built accommodation was completed in June 1995 and in 1998 Vosper Thorneycroft started the teaching contract. 4 Battalion REME arrived in March 2000. In April 2004 SEME became part of the Defence College of Electro-Mechanical Engineering (DCEME) in partnership with the Royal Navy and Royal Air Force.

A welcoming ceremony for Commodore Neil Latham, who has overall responsibility of the new school, was held at Prince Philip Barracks.