On 17 th December 1913 the Empire Club was opened as a Soldiers' Club by Field Marshal Lord Methuen GCB GCVO GOC-in-C South Africa, the cost being met by a grant of 8,000 Pounds to the GOC-in-C Aldershot Command, Lieutenant General Sir Horace Smith-Dorrien GCB DSO, from the funds of the South African Institutes.

The architect responsible for the building was Major R.N. Harvey DSO, RE and Major H.K.Pritchard DSO, RE was in charge of the work, with Captain and Quarter Master A.Jones late RE as the Clerk of Works.

It may be assumed that the Club flourished during the First World War and immediately afterwards, but in the early 1930s both the NAAFI and YMCA attempted to run it and failed to make a profit. In January 1938 the YMCA gave up their lease and the building remained empty until July 1938, when Bordon Entertainments Ltd took the Club on a 21 year lease.

In the early days King George V Gardens adjoining the Club were beautifully kept up by a full time gardener, and on Sundays after Church Parade the bands of the Regiments stationed in Bordon used to play in the bandstand in the gardens. Originally there were also two grass tennis courts and a bowling green. 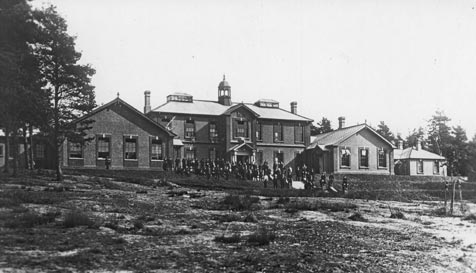 
In 1946 it was suggested that NAAFI should again take over the running of the Club, leaving the cinema under the control of Bordon Entertainments Ltd, but this was never carried out. Instead the NAAFI opened a Garrison Club in Louisburg Barracks South.

Many improvements were made to the old Soldier's Club, including the conversion of the dance hall into a cinema shortly after taking over the premises, and the provision of a new ballroom and bar in May 1955. A lido was opened in 1963, where mothers could take their children to paddle in safety.

On 5/6 March 1948, a serious fire occurred in the Club resulting in approximately 3,000 Pounds worth of damage being caused. In October 1952 Bordon Entertainments Ltd obtained a new lease for 42 years. Mr H.J.Randall was appointed Manager of the Club in 1938 and became Tenant / Proprietor ten years later.

The Empire Club was burnt down in 1987, when it was in the ownership of the District Council. The insurance money was going to be used for an Arts Centre but this never materialised. The site is now occupied by houses and forms part of Pinewood Village.