This immense span of time covers at least two ice ages during which few, if any, humans lived in what is now southern Britain. During the intervening warmer periods, bands of nomadic hunters passed through our area leaving behind some of their stone tools, such as the Acheulian handaxe found at Kingsley.

This form of axe was used by a type of hominid known as Homo heidelbergensis whose fragmentary remains have been found elsewhere in England. These people were hunting animals such as deer, horse, boar, elephant and even, during some warmer periods, hippopotamus

At around 300,000 years ago there is evidence for the presence of Neanderthals in the general area as remains of their characteristic stone tools have been found just to the north in the river terrace gravels at Farnham.

By about 30,000 years ago the first modern humans enter southern Britain, crossing from France at a time when the English Channel was still dry land. Their more sophisticated stone toolkit included flint arrowheads, scrapers, burins, blades and many other types of specialist impliment, examples of which have been found just north of our area.

The period was one of extreme cold with the glaciers reaching their maximum extent at around 12,000 years ago when the Whitehill / Bordon area was just south of the main ice sheets. Pollen samples taken locally show that the vegetation was similar to northern Finland today with a covering of dwarf bilberry, dwarf birch and various grasses. 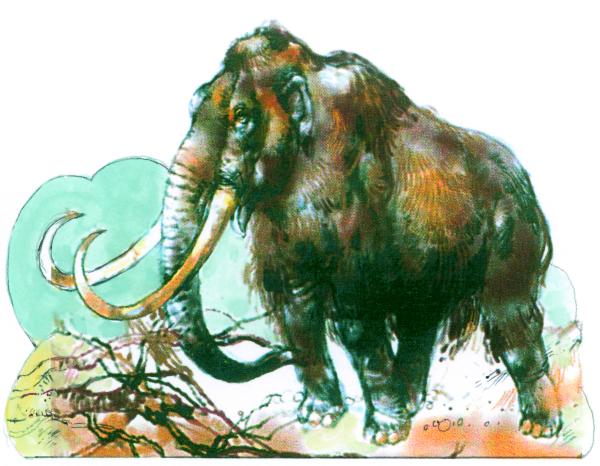 (Artists Impression Of a Mammoth)

(Part of a Mammoth Tusk)

Finds of the bones, tusks and teeth of woolly mammoths, woolly rhinos and musk ox are surprisingly common from local gravel pits, particularly those along the river Wey around Farnham.